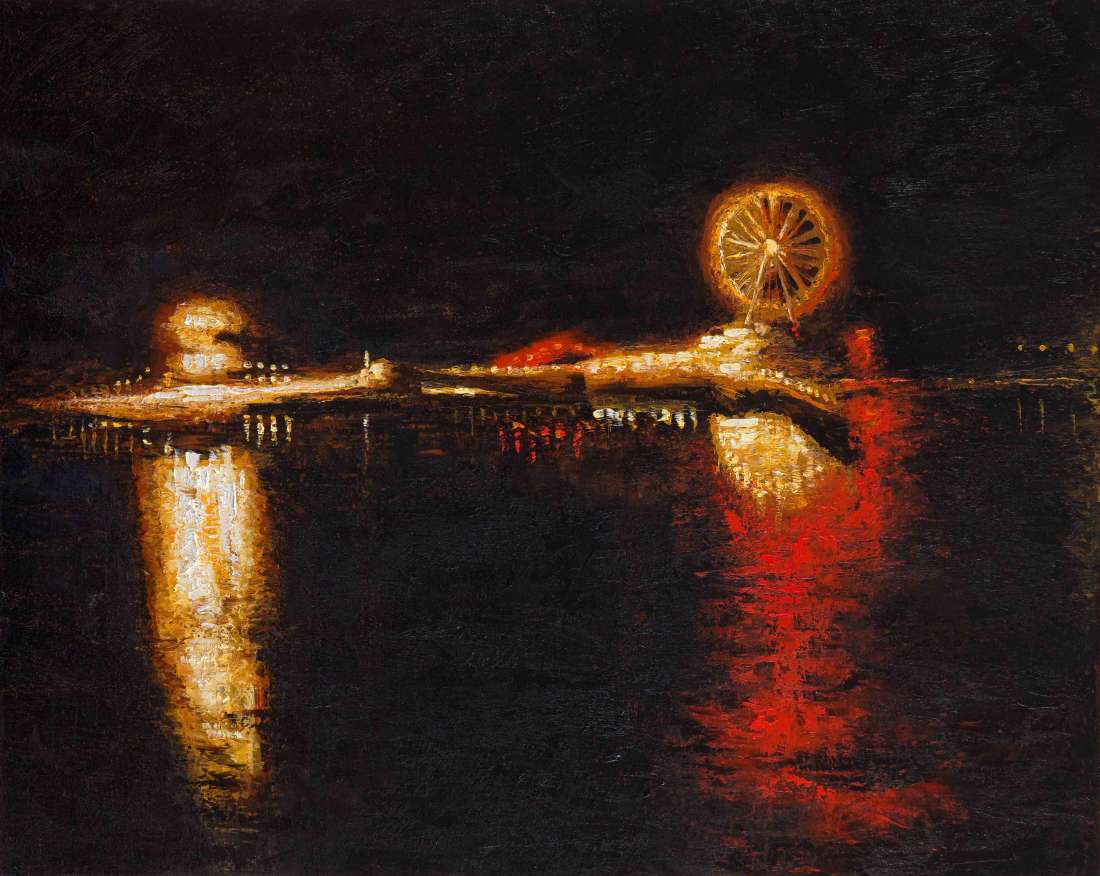 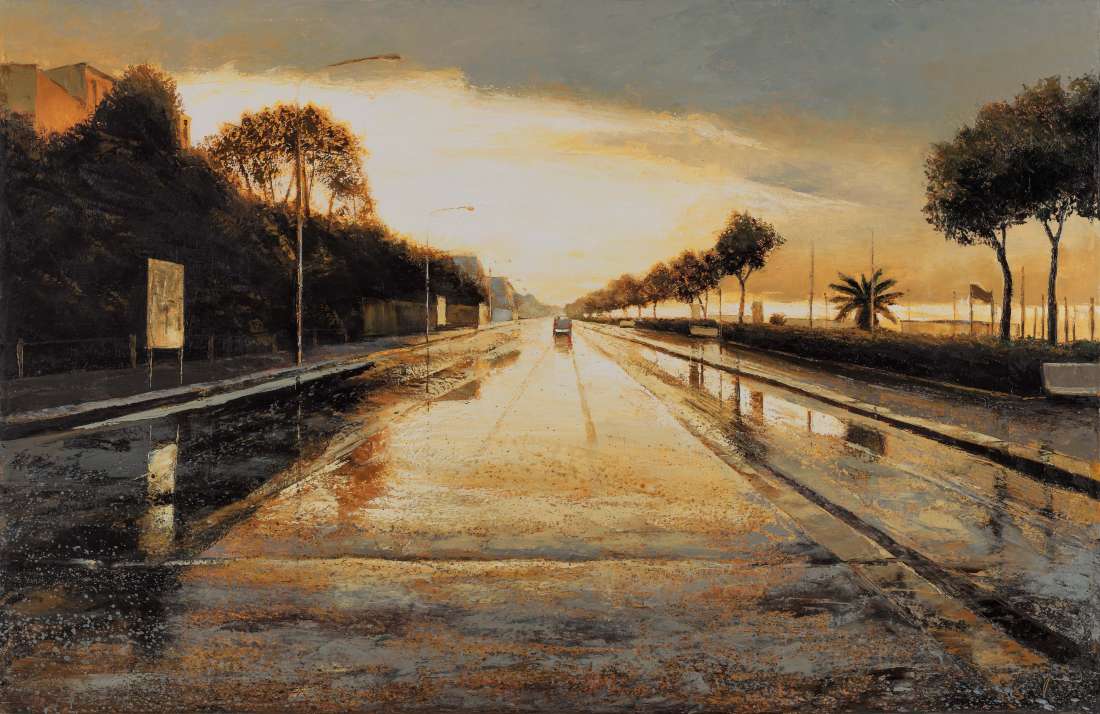 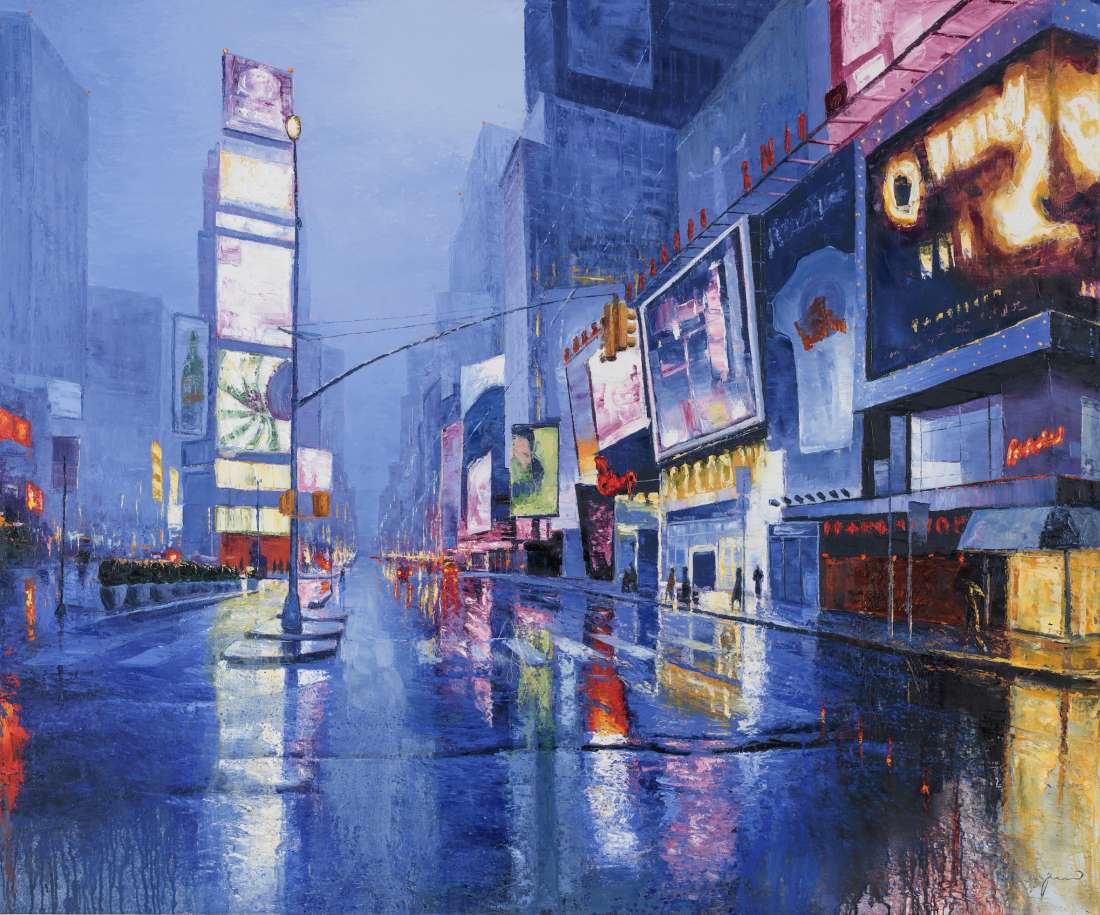 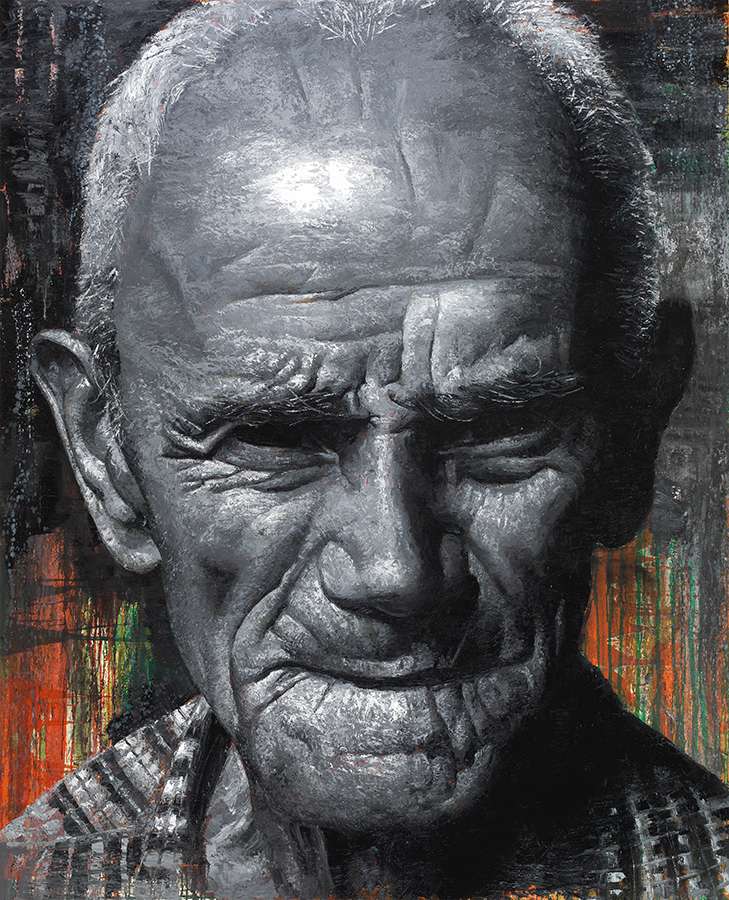 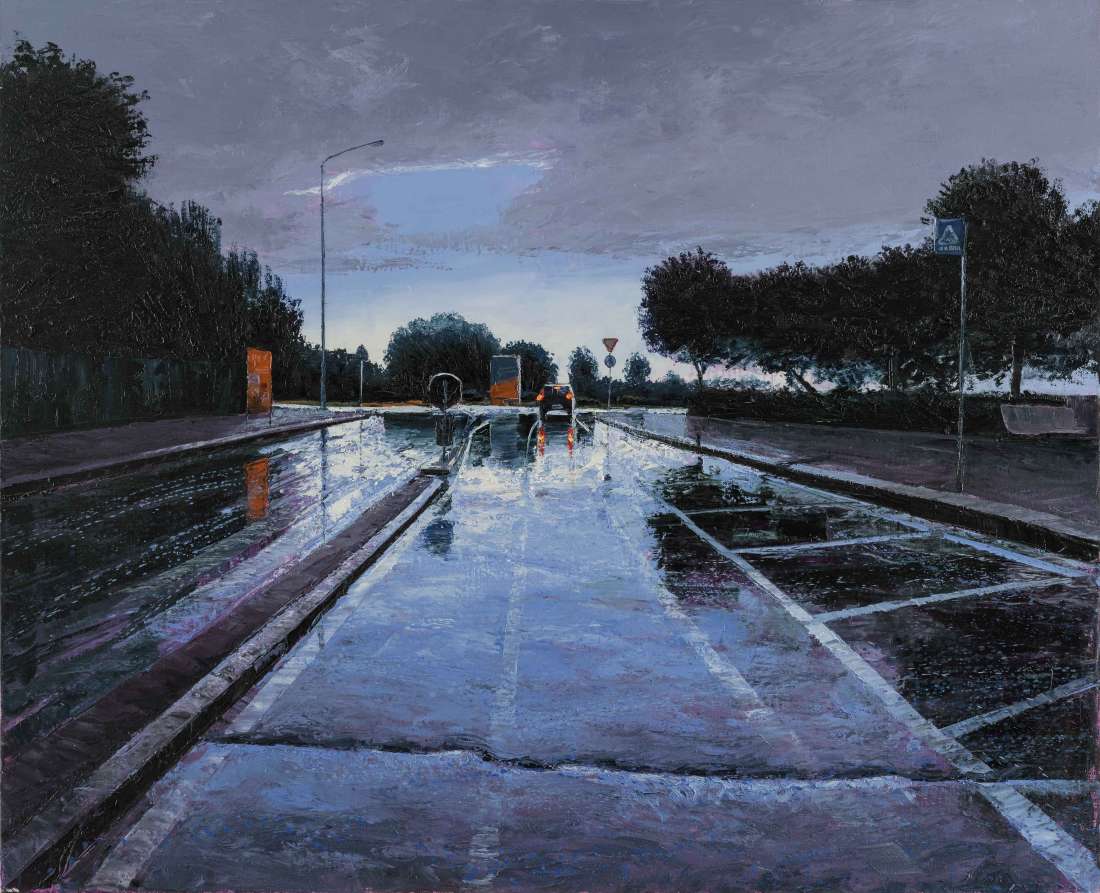 Born in Rimini in 1965, where he lives and works, Davide Frisoni graduated at the Liceo Artistico of Rimini and at the Arts’ Academy of Bologna. His works are found in many museums, public and private collections in Italy and abroad (among others: the Ducati Collection of Tokyo and the Sharon Gallery in San Diego California, the Picture Gallery of Crotone and CARIM Foundation). He won twice the International Competition for Roma 2000, ’98 and ’99 edition, after which he participates at collective expositions in Rome, Florence, Venice and Paris. Since 1999 Frisoni started a painting research on light and color; its main subject is the normal reality, the bewilderment of daily life. The road becomes the favourite place for this research, with all its vehicles, car-lights, cross-lights, storming skies, road-lights… These works arrived at the final stages of the Premio Morlotti in Imbersago, in 2000 and 2001.

He worked with Art TV chain Telemarket from 2001 to 2004. In 2003 he participates to the “Views” exhibition at the Sharon Gallery in San Diego, California. In 2004 he is invited at the “International ArtExpo’” in New York. Since 2007 he collaborates with 6 galleries in Italy and abroad becoming one of the most famous italian artist belonging to the “Nuova Figurazione Italiana”. In 2007 he was invited to the Biennale of Lucca. In 2009 he was chosen by the critic Alberto Agazzani for Sismondi, the Biennale di Rimini, into the exhibition “Contemplations. Beauty and tradition of the new in contemporary painting” and, also, for “Other contemplations” at the LIBRA Gallery in Catania and “Comparison of Ten” in Castel Sismondo in Rimini in 2010. In the same year he exhibits three works at Art Basel Miami.

2011 has been a year of great events. In july he participates to the collective exhibition “TRICOLORI. Tre artisti per tre colori” organized by the Comune di Rimini for the 150th anniversary of Italian Unity, where he has shown a new series of works dedicated to cultural identity. Afterwards, on invitation by Vittorio Sgarbi he partecipates to the Biennale di Venezia, Italian Pavillion in Parma at Palazzo Pigorini. Vittorio Sgarbi invited him at the last exhibition of the Venice Biennale in Turin the 20th of december 2011 at the Sala Nervi in the Palazzo delle Esposizioni. For this exhibition Frisoni created a huge portrait, a painting measuring 195×240 cm entitled “The Old Trucker”. In 2012 he exhibited at the Leonart Gallery in Conegliano (TV) a series of painting dedicated to the face “The Human Face” with which he also participates at the fair BERLINER LISTS 2012. The 2013 will be inaugurated with the exhibition “The Human Face” with new works at the International Art Center & Gallery in Bologna by the Bongiovanni Galleries. He is a finalist for the Arte Laguna Prize  in Venice with the work “Thank you Anselm”. In July, a major solo exhibition at the Museum of Ancient Treasure of Loreto with a cycle of works dedicated to the Passion of Christ. In 2014, opens to Restarte Gallery of Bologna his most important personal exhibiton with the cycle of works “Reflections” with text by Gabriele Milantoni. The success is so great that it becomes part of the official exhibitions of Artefiera. In April, for the Biennale of Design in Rimini, he inaugurates an exhibition entitled “Metropolitan Block Notes”. New exhibition in May entitled “Metropolitan Visions” at The Art Gallery of Parma. He partecipates to three “meetings” with Leonardo Blanco and Luca Giovagnoli at the space of the Clinic Merli Expo in Rimini. He began working with the Gallery ArtSeverina Moscow with which participates in the event “Italomania” Italian Institute of Culture in Moscow. He is selected for the prize BP Award at the National Portrait Gallery in London. In May, he gave his first International Workshop of painting in Istanbul. In November he participates at the International Artfair of Tuyap (Turkey). 2015 opens with Bosphorus Sanat Gazetesi Venedik Bienali 2015 in Istanbul (Turkey), and the Quintessenza collective exhibition by Giorgio Bertozzi and Ferdan Yusufi in Rome. In March, the second meeting of the International Workshop of painting in the Frisoni atelier held in Rimini with Turkish artists. In May 2015 the Collettiva Sintesi organized by Giorgio Bertozzi and Ferdan Yusufi in Bursa in Turkey.

In July, the solo exhibition “Riflessioni Temporali” at the Town’s Museum of Rimini.This exhibition is related to the route taken by the cycle of paintings called Reflections, more than twenty works will be exposed. Some of these will be set up inside the museum, side by side the original paintingof the 1500 and 1600 in the collection of the Museum. An ambitious and important exhibition for the artist and for the city of Rimini, which fully supported and sponsored it.

In 2016, the first solo show in Istanbul takes place at the Galeri Selvin with the exhibition “Light 2.0”.